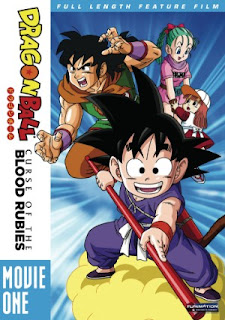 NAME :- Dragon ball
Type :-  Movie – 01
Type Name :– Curse of the Blood Rubies
Language :–  Japaneses audio Hindi sub
PLOT :- The film began with a prologue as the narrator explains to the viewers about how the Dragon Balls, seven orange balls with different number of red stars on each one, were forged and scattered throughout the Earth. It is said that when all seven are gathered together, the Eternal Dragon named Shenron; custodian of the Dragon Balls, will rise from his fiery lair and grant whoever summoned him any one wish. Afterwards, the Dragon Balls will again scatter all over the world while Shenron returns to his lair until another “brave or foolish soul” will find and reunite these magical balls.
In the present, the soldiers of King Gurumes are destroying the homes and lands of farmers within his kingdom to look for “Blood Rubies”. His two main enforcers are Pasta and Bongo (Raven and Major Domo in the 1995 dub), whom he has also tasked with finding the Dragon Balls. Since finding the Blood Rubies, King Gurumes has fallen under a curse that makes his hunger insatiable. He hopes to wish the curse away with the Dragon Balls. A little girl named Pansy (Penny in the 1995 dub), after her father gets a brutal beaten by Bongo in defending her, decides to go and find help.
/

Like/Follow us on FB

Our Official Page Deleted.... Follow us on Insta [ https://www.instagram.com/teamprojectx_official/]

Classroom of the Elite S02 E01

A Couple of Cuckoos E11

The Rising of the Shield Hero S02 Completed

Shikimori’s Not Just a Cutie E11

Skeleton Knight in Another World Completed

i Want to Deliver your Voice

Made in Abyss Movie

Vampire in the Garden Completed

The Testament of Sister S02 Completed

The Case Study of Vanitas Completed

The Qwaser of Stigmata S02 Completed

Eden of the East Completed

The Aquatope on White Sand Completed

The Daily Life of the Immortal King S02 Completed