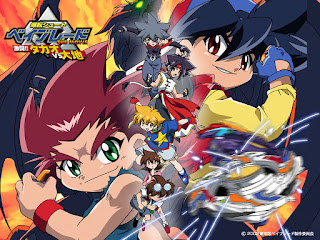 The movie begins with the battle of Tyson with a boy in BBA Final Tournament of World Championships. Just as the battle ends, a mysterious boy named Daichi enters the stadium, challenging Tyson to battle with him. Tyson reluctantly agrees and both launch their blades. On the other hand, a man name Professor Tengai takes his students to a trip in an ancient ruins where he explains to them, are hidden dark bit beasts sealed to rest by an ancient king. Back in the fight, Tyson starts to defeat Daichi who, in rage, starts empowering his blade and a scar on his forehead lightens up. In the ancient ruins, because of that scar’s mysterious light, a rock breaks to reveal a secret chamber.Daichi is defeated back at the stadium but another story has begun in the ruins. The Professor and his students enter the hidden cave in awe and reach a mysterious hall with a stone table in the middle. They reach it and suddenly the bit beast which were sealed in the walls of the hall become free and enslave the four children.They become evil and imprison the Professor because their memory is lost. Tyson soon comes to know throughout the movie that those dark bit beasts now want to seal the light bit beasts of the four blade breakers, and….more info [Wiki]

The Daily Life of the Immortal King S3 E10

The Eminence in Shadow E08

To your Eternity E25

More than a married couple, but not lovers E07

The Testament of Sister OVA 03

A Couple of Cuckoos Completed

Call of the Night Completed

The Devil is a Part-Timer! S02 Completed

Classroom of the Elite S02 Completed

When Will Ayumu Make His Move? Completed

Harem in the Labyrinth of Another World Completed